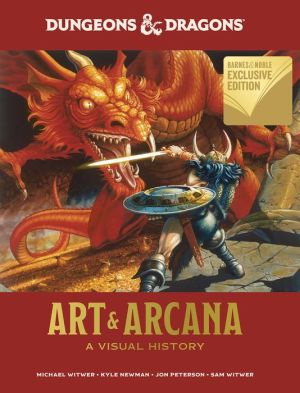 Dungeons and Dragons Art and Arcana: A Visual History

Dungeons and Dragons Art and Arcana: A Visual History (B&N Exclusive Edition) by Michael Witwer, Kyle Newman, Jon Peterson, Sam Witwer The Barnes & Noble Exclusive Edition features a unique cover, plus six full size gate-folds including additional game maps, draft sketches, panels from past adventures, non-player character illustrations, and additional levels of iconic dungeons. An illustrated guide to the history and evolution of the beloved role-playing game told through the paintings, sketches, illustrations, and visual ephemera behind its creation, evolution, and continued popularity. Dungeons and Dragons is the most iconic and pervasive gaming franchise in the world. It is a seminal RPG (role-playing game) and the inspiration for video games like World of Warcraft and Zelda, fantasy art, and countless other facets of "geek culture." This officially licensed illustrated history provides an unprecedented look at the visual evolution of the game, showing its continued influence on the worlds of pop culture and fantasy. It features more than 700 pieces of artwork--from each edition of the game's core books, supplements, and modules; decades of Dragon  and Dungeon magazines; classic advertisements and merchandise; and never-before-seen sketches, large-format canvases, rare photographs, one-of-a-kind drafts, and more from the now-famous designers and artists associated with the game. The superstar author team gained unparalleled access to the archives of Wizards of the Coast and the personal collections of top collectors, as well as the designers and illustrators who created the distinctive characters, concepts, and visuals that have defined fantasy art and gameplay for generations. This is the most comprehensive collection of D&D imagery ever assembled, making this the ultimate collectible for the game's millions of fans around the world.